In the age of broadband connections of varying types and speeds there are many that are not running to their full potential, time after time there are users that have not experienced true broadband speeds because something is not functioning correctly or optimised properly. This guide will guide anybody through the correct and incorrect ways to make sure your broadband connection is working at it’s peak. It is focused on Australian ADSL/2+ connections but can be used elsewhere in most cases.

Truth in Advertising
Broadband advertising can be tricky to get your head around if you are still on dial-up, it can also be hard if you already have broadband. Picking the right plan for you is a tough choice, but it is a choice you must think about if you are serious about getting your money’s worth.

Unlimited. It’s a catchy name and it’s a dangerous one, big Internet companies love using it to describe any connection regardless of how many limits there actually are. Here is the formula to determine how they came up with this term, unlimited in broadband terms means that no matter what happens, you can still use your Internet connection, it may be slowed down, you may have to pay for extra costs, but the connection will work, simple however many people are fooled.

In this country there are less than a handful of companies that offer broadband access without having some sort of pre-paid monthly cap on what you can download (in some cases what you upload as well, be sure to check), these caps come in the form of:

I recommend you pick option 1 if you are a home user and 2 if you are a business user, being slowed down is hard to deal with, however it is better than paying large amounts.

The truth is you don’t know what is going to happen in the month, you might get a virus that uses your connection for a malicious deed causing you to reach your quota easily, it is better to be slowed down than to owe hundreds or thousands to your ISP.

If you are a business user (you use your connection at or for a business), getting slowed down can cause many problems with productivity, however you may be able to spare the extra amounts if you go over the cap.

The plans may look daunting at first, however they are very simple and have 2 concepts, speed and monthly cap, take this example of a plan listing:

In this basic table the cost is how much it will cost for the connection per month with the pre-paid amount of allowance/quota/limit that each will allow. Most importantly, unless otherwise specified the speed is in kilobits per second, sometimes the 1500/256 connection will be listed as 1.5/256, this is in megabits/kilobits, the first speed is always the speed at which you can download at, the second speed is always the speed that you can upload at.

The allowance or cap is actually quite easy to find out if you currently have an Internet connection, go to your ISPs member section to find this or give them a call and ask them your average monthly usage and if there is any trend towards higher usage or lower usage, pick a plan that can easily handle your usage while giving a bit of leeway for extra usage each month.

Business or Home/Residential user?
If you are a business do not be fooled by the cheap home user plans, you are eligible for them however it is never a good idea, there is a reason they are cheaper.

A proper business plan in Australia comes with an SLA, Service Level Agreement, ISPs try to keep home or residential Internet connections up most of the time, but they go down for routine maintenance. With an SLA business account are prioritised so that they should not go down unless there is an urgent upgrade or major outage, if they do go down, they are subject to the SLA and businesses can request monetary compensation in many cases.

The Standard Testing
So you have the Internet connection of your choice and you believe it isn’t working to it’s best, or it’s shockingly slow, the first thing to do is check that it actually is slow, there are 2 instances that are considered slow, the actual download speed and ‘latency’, to check these you first need a bit of information:

Once you have the connection speed do a speed test, this must be done directly from a local source, there’s no point doing a speed test in the USA if you are in Australia for example as the indicated speed will be way off, if your ISP has a local FTP or gaming mirror, download a file off there and see what download speed you achieve, it will start fast and slow down to a certain speed and usually stay there, that is your real world download speed. 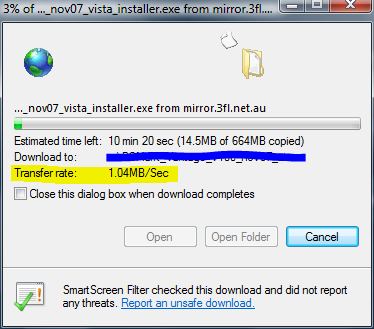 So in short, (download speed quoted by ISP divided by 8 then minus the same calculation multiplied by 0.13) will give you your maximum possible download speed in kilobytes per second, compare that to the speed you achieved on the download test, in my case it is quite slow, I’m missing about 700 Kilobytes off what I should be able to get, but that is because I had another download occurring at the time.

Is your download speed still slow? Here are a few quick things to look out for:

Then do a speed test again.

Did the speed increase or stay the same? Remember to keep trying different things, if you lie while going through the list, or you think a test I have listed won’t work you’re not going to get the problem fixed, it is always best to just do them, testing can be tedious, but the results are satisfying and it’s not going to hurt.

Now onto latency, latency on the Internet is the time it takes for you to tell your computer to do something Internet related and the time it takes to get a response. So if you are browsing websites and they are all taking a long time to even start loading, you may have a latency problem, gamers are familiar with latency problems, as games need an incredibly low latency to be able to play between players over the Internet.

Latency gets higher the further away a computer is on the Internet from another, however the paths that links between computers on the Internet take can also influence latency. For example, a computer connected to a Satellite Internet connection must receive data from a satellite in orbit, so even though it may request data from a computer in the next suburb, the data must travel up through the atmosphere, then back down again, to get there, covering a large distance and generally having the amount of latency you would expect between Australia and the USA on a normal connection.

In Australian cities ADSL connections generally have a latency to the border router (basically to your ISP), of 10 to 30 milliseconds. You can check this by opening a windows command prompt and typing in ‘tracert’ minus the quotes then your ISP’s website ie www.amnet.net.au, do not include a trailing / or http://, an example of mine :

The border router is at ‘hop’ 3, it’s indicated by the 3 in the first column, it’s not showing on mine, but on yours it should show just like the rest, the numbers in the next 3 columns are important here, they are the latency values in milliseconds, generally you should get no more than 100ms on an Australian ADSL connection unless something is wrong, fluctuating values for the latency through these results, ie getting 6ms, then 40ms in the next column, then 8ms in the last generally indicate a bad Internet connection, following the steps above can usually alleviate this problem, if not contact your ISP.

Your connection is only as good as the hardware you use
So you get an ADSL connection and your ISP recommends you buy a modem from them, do some research first, unless it is some brand new thing that runs something that your Internet connection requires that no other brand has yet it’s probably a bad idea to take them up on their offer.

All Australian ADSL/2+ connections can use the same hardware unless specifically stated, go to a reputable PC Shop and ask them what they recommend for you, don’t go with the cheapest as you get what you pay for and if they offer a modem called a DSL-200, it’s old technology and bad PC stores have been trying to get rid of them for years, go to another store.

Less is more, unless your modem doesn’t have enough Ethernet ports, or your modem is old and can’t handle much, try to keep the amount of other unnecessary equipment down. Modern ADSL Modems are actually more commonly called ADSL routers as they are a router with an ADSL modem built in and can usually handle what is thrown at them, so there is no excuse to have an additional router when using them and only causes headaches when troubleshooting. The same goes with having a separate Ethernet Switch/Hub (if you have a hub, get a Switch), they should only be necessary when you don’t have enough ports on your Router.

Running ADSL is a lot harder than running your telephone, a phone cable that has worked since 1982 may simply not be appropriate for running ADSL, always try to use new phone cables with ADSL, old cables can have damage and lower shielding than new cables and that can degrade the ADSL signal. ADSL is very sensitive and any interference can cause it to perform poorly, or not at all. ADSL filters in my experience seem to not have very long lives and some have simply been put on the market when they don’t perform correctly, always test them when you have connection issues.

Know the limits
Your broadband connection is not limitless in any way, regardless of what the salesperson told you, there are some limits you must follow at all times.

If you want to squeeze the most out of your connection and you are running Windows 2000 or XP, then I recommend going to SpeedGuide.net and downloading a copy of the TCP Optimizer, it’s simple to use however it can cause problems if used incorrectly so keep that in mind, once it is downloaded run it, choose the Optimal Settings radio button down the bottom and drag the connection speed slider so that it indicated the download speed (in Kilobits per second) that your connection can achieve, then click Apply changes, you will have to restart after this.

Windows Vista, Mac OSX and Linux are more sophisticated and generally don’t make much use of any tweaks to get the best out of your connection. Vista constantly checks and determines the correct values for your connection on the fly.

If you have any further problems, or have any questions, leave a comment and I’ll get back to you.

2 thoughts on “Getting the most out of your internet connection”