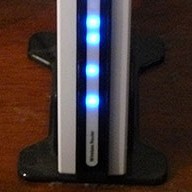 This is how SharePort works, I will use my DIR-655 and Brother DCP-150C MFC as an example.
The DIR-655 has a USB port on the back, tests seem to indicate it is a USB 1.1 port, up until now the port was used for wireless settings that could be stored on a USB key. 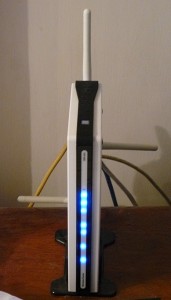 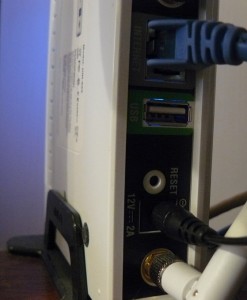 After installing the new firmware however the USB port has found more use, we’re greeted with a new menu under Setup that controls the use of the port. 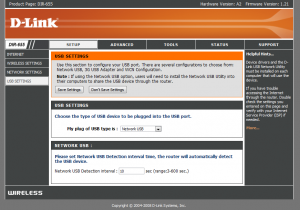 As you can see there is not much to the setup of this USB port, WCN Configuration is the default, this is used for the wireless configuration key, choose the dropdown box:

Choosing Network USB puts the router in SharePort mode, choosing 3G USB Adapter is a bit of a mystery to me, I’m not sure what devices are compatible with this yet, however as most people do, I have a 3G service and using it as a backup by only connecting the device up to the USB port and choosing 3G USB Adapter would be very handy.

Once you have chosen Network USB the device is automatically shared, however in order to connect you must install the SharePort software from D-Link, this is still in Beta it appears so use with caution etc etc, I haven’t had a problem with it yet and it seems fairly polished. once it is installed make sure you allow it to run at startup and run it straight away, otherwise you won’t be able to use the device without manually running the SharePort software each time, it only uses 2MB of ram so it’s not a resource hog. 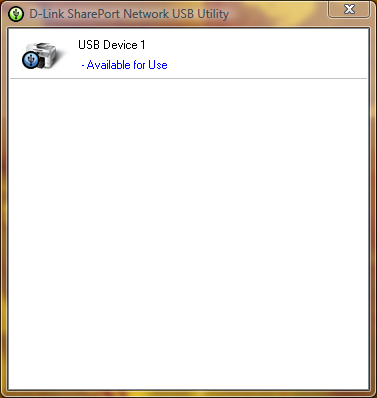 If your USB device is on and connected then the SharePort utility should display like this once you double click on the icon in the system tray. It will then allow you to run through a wizard for installing the device, you will need your device’s driver cd or the latest driver for their website, at the end you will be asked if you want to automatically connect to the device when you print if it is a printer, this is a good idea otherwise you must manually choose to connect.

The limitation of this feature is that it will only work on one PC at a time, USB devices simply aren’t designed to be connected to 2 PCs at once so it makes sense why this is the case.
I have not tried such things as webcams however they have been known to work, however at a slower rate than normal, the scanner feature of my printer works fine, however you must manually connect using the SharePort software to use it, make sure you disconnect after you are done.

As I stated at the start of this article the SharePort software is something I have been waiting a long time for, it’s a great feature considering my router is not the latest out there now and it almost seemed like D-Link had given up adding new features to it, it also shows how well the device can work if it can handle a USB device while it is performing all it’s other duties.